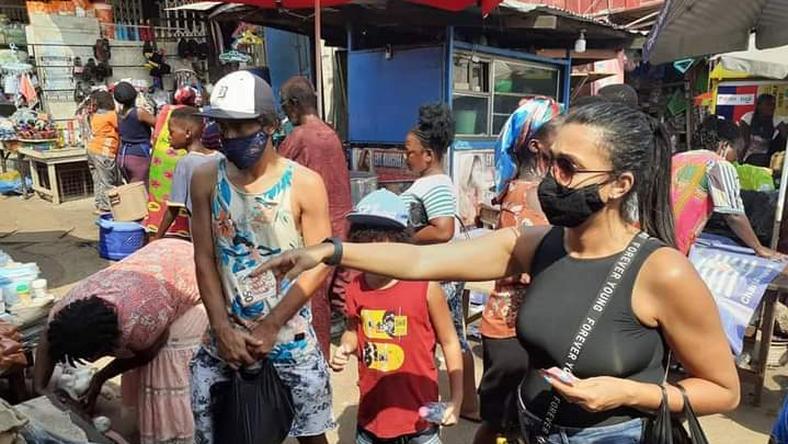 Photos with the caption “Fabio Gama and wife doing some shopping at kumasi market. Beautiful family” has been trending on social media since it was posted.

Gama looking sporty was in sleeveless top, shorts, sneakers and a cap, while his son was also in a similar outfit and his beautiful wife whose name hasn’t popped up yet was looking beautiful in her black top and down jeans.

The family bought groceries such as ripped plantain, canned fish, canned tomatoes, etc from the market.

READ MORE: Most Man of the Match recipients and Top Scorers after GPL matchday 8

Fabio Gama was the toast of Ghanaian football-loving fans after he produced a sensational full debut in Asante Kotoko’s 2-0 win over Liberty Professionals on Monday.

Kwame Opoku bagged a brace to inspire Kumasi Asante Kotoko to a 2-0 win over Liberty Professionals at the Accra Sports Stadium on matchday 8 of the Ghana Premier League on Monday.

Fabio Gama who had some few minutes in Kotoko’s 1-1 draw against Medeama was unleashed this time on Liberty Professionals.

His take-ons, dribbles, ball control and accurate passing abilities caught the attention of spectators and people who followed the game closely on all channels.

The highlight of Fabio Gama’s performance on the afternoon was a defence-splitting pass to Kwame Opoku, who did so well to outwit his markers to slot it home for Kotoko’s second goal.

Gama’s display came on the back of doubts surrounding Brazilian players who emerged in the Ghana Premier League with much hype surrounding their arrival, yet failed to make an impact on the domestic league.

The Brazilian midfielder has been trending on social media since his stellar performance against Liberty Professionals.

Consider students and call of strike – Group appeals to TUTAG