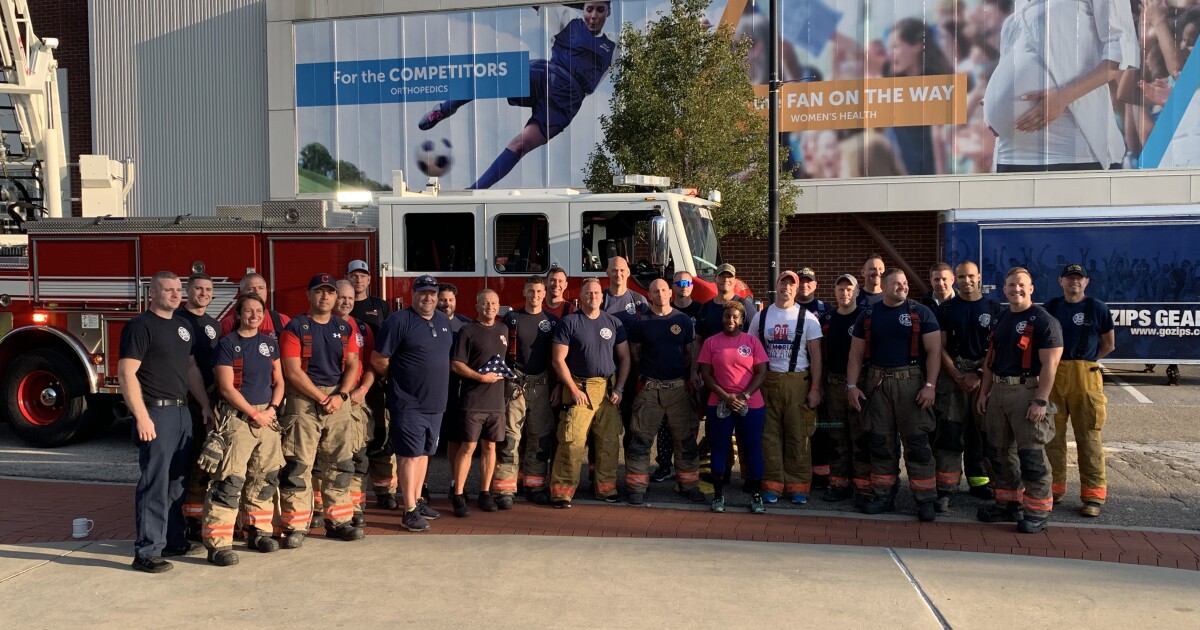 AKRON, Ohio — On the 20th anniversary of the 9/11, Akron firefighters took part in a stair climb to honor their fallen brethren who died in the terrorist attacks.

“The events of September 11, 2001, mark the deadliest terrorist attacks in world history. The response of FDNY Fire Operations personnel to the World Trade Center was unprecedented in scale and scope, with more than 200 fire units responding, approximately half of all units in the city. Their efforts were supplemented by numerous off-duty firefighters and emergency medical technicians,” said Akron Fire Fighters Association Local 330. “Firefighters, police officers, and EMS professionals ascended into the Towers, hoping to reach everyone in the 110-story structures. Although we will never be able to fully grasp the mindset or stress of that day, we can honor those who answered the call for help and support our local first responders through the work of the Safety Forces Support Center.”

“Serving first responders primarily in Summit County, but also available to Portage, Stark, Medina, Cuyahoga and Wayne counties, the Safety Forces Support Center provides specialized services focusing on the unique job stressors that fire, law enforcement, EMS and dispatch personnel experience, which can have a significant impact on their physical, mental and emotional health. Its training programs are also offered to mental health professionals and chaplains.”

The event was a collaboration between Akron firefighters, the City of Akron, Summit County Executive’s Office and the University of Akron.

“This event is an opportunity for not only firefighters, but the community to pay tribute to first responders and civilians who lost their lives on September 11. 2001. It also helps to raise funds to support our local Safety Forces Support Center,” said Akron Fire District Chief David O’Neil.

To donate to the Support Safety Forces Center, CLICK HERE.

Download the News 5 Cleveland app now for more stories from us, plus alerts on major news, the latest weather forecast, traffic information and much more. Download now on your Apple device here, and your Android device here.