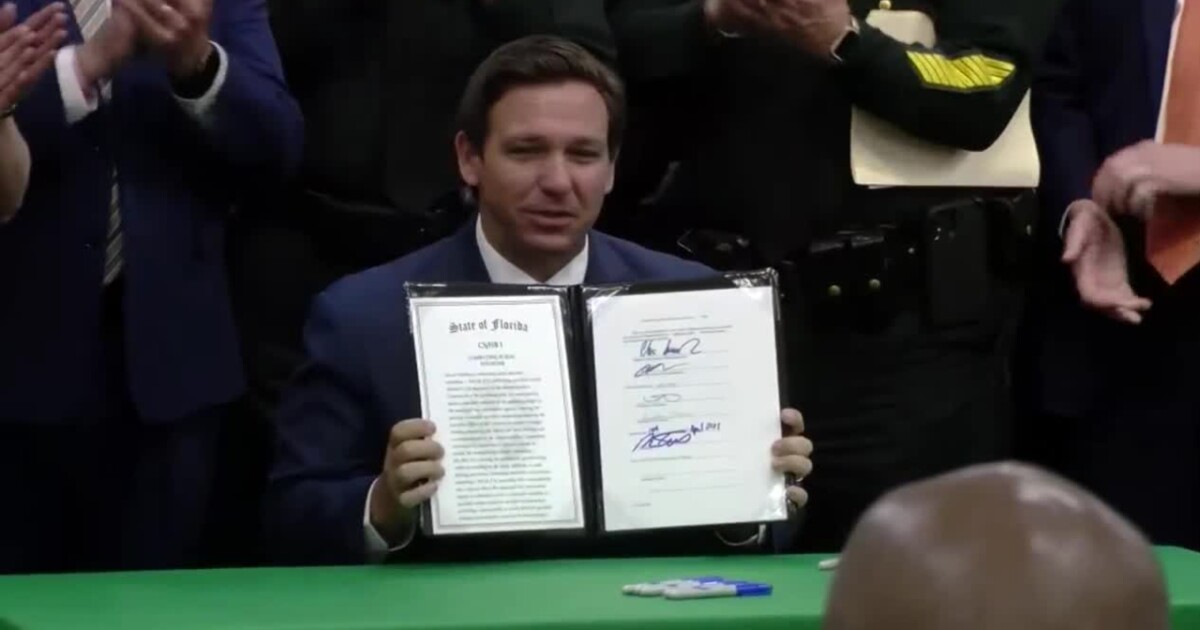 POLK COUNTY, Fla. — Just days before a verdict is expected in the high profile Derek Chauvin case, Florida leaders want to make sure any demonstrations in the Sunshine State don’t get out of hand.

Gov. Ron DeSantis on Monday signed the so-called “anti-riot” bill into law, which places tougher penalties on protesters who engage in violent rallies.

“We’re not gonna let the mob win the day,” DeSantis said during a news conference in Polk County, calling the plan the “strongest anti-rioting” legislation in the country. “The state of Florida takes public safety very seriously.”

The measure was first proposed by the governor last year following violent Black Lives Matter protests after Chauvin, then a police officer, killed Minnesota resident George Floyd by kneeling on his neck for more than eight minutes.

The new law, which takes effect immediately, punishes protesters who take part in violent and disorderly demonstrations in Florida.

“If you riot, if you loot, if you harm others, particularly if you harm a law enforcement officer during one of these violent assemblies, you’re going to jail,” DeSantis said.

In addition, the law penalizes protesters who commandeer highways — like we saw in May of 2020 in West Palm Beach — topple monuments, or those who take part in “mob intimidation” by accosting the public.

“If you’re derelict in your duty as a local government, if you tell law enforcement to stand down, then you’re responsible for the damage that ensues,” DeSantis said. “And if someone’s been harmed or their property has been destroyed, then they can sue you for compensation.”

Democrats are staunchly opposed to the bill, worried its broad language will suppress nonviolent demonstrations and minority voices.

Following DeSantis’ news conference on Monday, Florida Agriculture Commissioner Nikki Fried — who appears to be eyeing a run for governor in 2022 — released the following statement:

“This isn’t a game. This Governor and his Republican allies love to talk about the Constitution, while shredding it with extreme legislation like HB 1. Silencing the speech of those seeking equality is straight from the Communist regime playbook. The criminal aspects of this bill are already illegal. HB 1 protects no one, makes no one safer, and does nothing to make people’s lives better. It’s simply to appease the Governor’s delusion of widespread lawlessness, and it’s frightening to imagine the lengths to which he’ll go to strip away rights and freedoms for political gain. The message from this Governor and his enablers is loud and clear: if you disagree with him, you will be silenced.”

“You can peacefully protest every day, and should peacefully protest if you feel like that’s necessary,” said Florida Senate President Wilton Simpson. “But if you cross the line and you start damaging property, you start threatening law enforcement, then this law is going to have the enhanced penalties that exist here.”

The former Minneapolis police officer is charged with second and third-degree murder in connection with the death of Floyd last May.

Floyd’s death and bystander video of his arrest sparked months of protests against police brutality and racial injustice throughout the country.