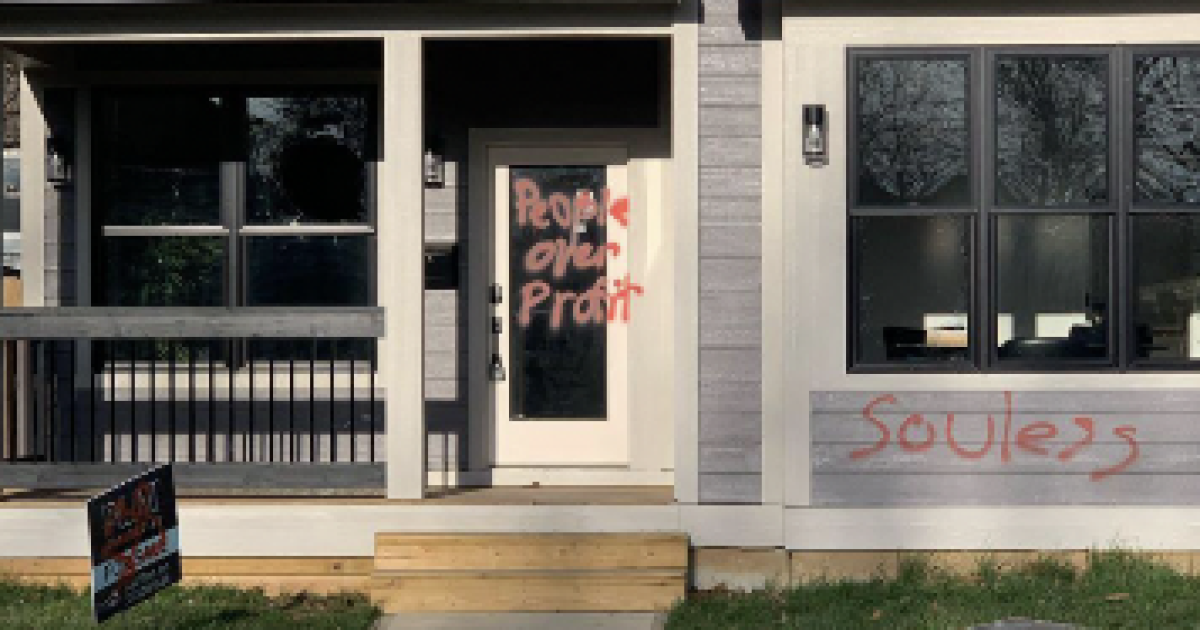 INDIANAPOLIS — Residents in the Windsor Park neighborhood on the city’s east side, woke up to vandalism on a newly built home last week.

“In the middle of the night someone came and spray painted our neighbor’s new house across the street and broke windows and wrote slogans on it with spray paint all over the side and the front,” Art Reiner said.

Neighbors snapped photos of the damage before the graffiti was cleaned off and the broken windows were boarded up.

Neighbors said before the house was recently built there wasn’t anything in the spot.

“That used to be a funky vacant lot with nothing on it, it was just crummy and so we’re happy to have a house,” Toni Macri-Reiner said.

Craig Banning has lived in the neighborhood for eight years. He used to rent and said he was lucky enough to be able to buy one of the last affordable houses before property values started to increase. He feels the messaging of gentrification is justified, just not the way it was delivered.

“I don’t agree with the vandalism. People were upset about the fact that it was a half a million dollar house in a neighborhood that used to be not like that. It used to be more affordable of a neighborhood,” Banning said.

He sometimes wonders if he is part of the problem, “I won’t lie my property values have gone up but it’s happened at the expense of the people who have been pushed out of the neighborhood.”

The change in affordability is happening in other Indianapolis neighborhoods too, like Herron-Morton Place.

Kelly de Waal, President of the Herron-Morton Place Neighborhood Association, explained how a few years ago their association expressed concern about gentrification and the ancillary things that go along with it. That’s why they now have a diversity committee, which de Waal is the chair of.

“We definitely know anecdotally that we have had residents displaced because their property taxes went up too fast,” de Waal said. “It makes sense to me why someone would become that desperate or that angry that they would vandalize a property and express it this way.”

The neighborhood association is taking action to address gentrification.

“Gentrification is generally a term used to refer to displacement of people or culture. We’re trying to prevent displacement in owner occupied housing by making people aware of their ability to appeal tax increases and we’re trying to work legislatively to promote bills like Senate Bill 99 which would’ve allowed City-County Council to cap property taxes based on your tenure in a certain residence. We’re also trying to support bills that are relevant to renter occupied housing,” de Waal said.

The group also advocates for affordability in new developments.

Many who live in the Windsor Park neighborhood believe the recent vandalism of the home is related to other acts in the community.

“It seems like the same kind of slogans that were written on the 10th Street property on the signs down there,” Macri-Reiner said.

The word ‘gentrifier’ is tagged on the sidewalks outside a condo building construction project.

The Indianapolis Fire Department is also investigating an arson at the property that happened in March. It is not clear if the crimes are related.

A spokesperson for the company behind the new condo building, Onyx & East, said they are committed to rebuilding and working with neighborhood groups on any concerns. The company mostly chooses vacant properties for their projects.